Corporate Pride: What’s Under Your Rainbow?

Rolling out rainbow-themed products and events each June is a popular corporate practice—but do those rainbows spell authentic alignment between a company’s stated values and its actions? 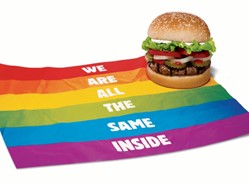 Burger King is serving a limited-edition “Proud Whopper” this month. The iconic burger is wrapped in rainbow paper that reads: “we’re all the same on the inside.”

As Pride-related marketing campaigns, product rollouts, and corporate events demonstrating support for the LGBTQIA+ communities increase each year, so too do the questions:

Some say that any opportunity to raise the visibility of the diverse, global LGBTQIA+ community, its contributions, and progress made is positive. This is especially important, because despite protections and acceptance in place in many countries, and millions of people attending events worldwide such as Madrid Gay Pride, Tel Aviv Pride, Pink Dot Singapore, Brazil’s Sao Paulo Gay Pride, and the Berlin Gay Pride festival in Germany, more than 70 other countries have laws that allow discrimination or outright sanctioned persecution of LGBTQIA+ people.

Some critics are skeptical about Pride merchandising and as i4cp has noted in previous years, even view it as performative capitalism.

“Unless they’re [Burger King] donating proceeds of the sales of those rainbow burgers to LGBTQIA+ organizations, it’s nothing more than a crass marketing gimmick to profit off of us and call it support,” an advocate commented on a social media thread dedicated to the topic.

In the case of Target, the company is doing plenty year-round to support the LGBTQIA+ community: Target donated $250,000 this year to GLSEN to advance its mission of creating affirming, accessible and antiracist spaces for LGBTQIA+ students. This is a decade-long partnership, with total donations by Target of $2.1 million to date. Target is also awarding a grant to PrideLive, a New York City nonprofit creating a Stonewall National Monument Education and Visitor’s Center at the NYC Stonewall Inn.

Bath & Body Works is making a $150,000 donation to the It Gets Better Project, supporting the nonprofit’s mission to uplift, empower, and connect LGBTQIA+ youth around the world.

Authentic diversity and inclusion is a daily commitment

In a 2021 op-ed for Fast Company (reprinted on i4cp.com), Rosanna Durruthy, LinkedIn’s VP of Global Diversity, Inclusion, and Belonging, and a member of i4cp’s Chief Diversity Officer Board, talks about how consistent day-to-day actions (well beyond the month of June), workplace interactions, and organizational policies combine to make tremendous impact in building an inclusive organization.

“It simply is not enough to incorporate a rainbow into a company logo, sponsor a float in a parade, or release a Pride-related product. On average, employees spend a third of their day at work and it’s critical for companies to actively challenge the status quo, examining their own internal policies and the impact these policies have created on the lives of their LGBTQ+ employees” Durruthy wrote.

Research from i4cp has shown that how a company shows up in the marketplace in terms of social and cultural issues matters greatly. It influences its relationships with both consumers and current and potential talent, who want to know exactly where a company stands on issues such as diversity, equity, and inclusiveness.

How much does it matter?

We also know that more than ever before in history, information about the operations and activities of organizations is easy to access. Candidates are coming to hiring conversations having done their own deep research on the organizations they are considering joining. So, conflict between what organizations say to the public and what they actually do is not a secret.

While a lot of progress continues to be made, organizations that make big splashes with their Pride messaging each June but make decisions in direct contradiction to those stated values are vulnerable to being called out by corporate policy watchdogs and repelling the talent they are trying to attract.

A scathing article published by Popular Information, using data from the Human Rights Campaign, titled “These 25 rainbow flag-waving corporations donated more than $10 million to anti-gay politicians in the last two years”  opens with: “This month, corporations are plastering their social media avatars with rainbows, sponsoring Pride parades, and declaring their unwavering commitment to the LGBTQ community. Many of these companies, however, are spending millions supporting the campaigns of anti-gay politicians at the federal and state level.”

This conflict is often referred to as rainbow washing—defined by Urban Dictionary as “The act of using or adding rainbow colors and/or imagery to advertising, apparel, accessories, landmarks, etc. in order to indicate progressive support for LGBTQ equality (and earn consumer credibility)—but with a minimum of effort or pragmatic result.”

As Marketplace reported earlier this month, and host David Brancaccio noted: “This year in the U.S., in the wake of recent anti-LGBTQ legislation in several states, experts suggest people will be taking a closer look at how corporations treat Pride."

“Companies are no longer able to straddle a fine line. Investing in one side with hostile intent while, frankly, seeking to profit from the other side, begs the question of whether a company lacks values entirely,” says Andrew Isen, founder and president of WinMark Concepts, a marketing and communications agency focused on the LGBTQ community.

The encouraging news is that the Human Rights Campaign’s (HRC) most recent annual benchmarking report, the 2021 Corporate Equality Index shows that over 750 companies have met the standards to achieve top scores for LGBTQ-inclusive workplace policies—a clear indicator that in spite of all the tests employers face, many continue to make progress in supporting and protecting LGBTQIA+ employees worldwide.

Employee groups are vital to staying the course

The challenge for organizations to be consistently true to their stated values and core principles is obviously complex. But building a culture firmly grounded in inclusion and belonging starts by inviting many stakeholders to the conversation so that the entirety of the workforce is represented.

Increasingly, we are seeing that organizations are leveraging employee resource groups (ERGs/BRGs) to participate in and guide important conversations about policy. A poll taken by i4cp this month bears this out—a combined 55% said that their organizations either already include ERGs in setting policy around LGBTQIA+ concerns or plan to with the year.

As we head into the end of June, take a moment and assess the sorts of conversations about diversity, equity, inclusion, and belonging taking place in your organization. Are day-to-day decisions and actions visibly guided by your stated mission, vision, principles, and values? Is there a disconnect between what your Pride messaging says and what’s actually happening inside the company throughout the year? If there’s less action than messaging, what can you do about it? How can you help ensure that your organization is living its values in ways that make you feel proud to work there? How can you be the change you wish to see?

The Many Facets to Connection

Most Employers Have No Intention of Talking About Roe v. Wade