The Early Days of Cultural Evolution: A Conversation with 3M's SVP of HR Kristen Ludgate

Organizations talk a lot about encouraging innovation, but fostering new ideas and concepts has been a priority at 3M for a long time.

For more than 70 years, 3M has urged its employees to devote 15% of their time on the job to doing something beyond their usual responsibilities—experimenting with new technology, collaborating, and pursuing new ideas and projects with others outside their work areas, for example.

This experimentation has certainly paid off, in the form of new products and improvements to existing ones, and this forward-looking mindset has helped maintain 3M as a Fortune 100 organization with operations in 70 countries and sales in 200.

3M considers its 15% Culture part of the company’s DNA, and a key component of 3M’s success. But, that doesn’t mean the organization’s culture doesn’t have room for improvement and experimentation.

In fact, 3M is in the early stages of a cultural evolution, says Kristen Ludgate, the company’s senior vice president of human resources. 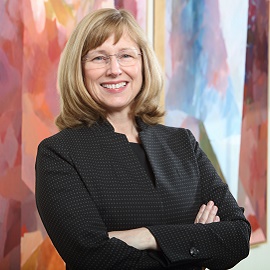 “In this era of changing work expectations and labor shortages, we need to continue to attract the very top talent,” says Ludgate. “And if we don’t continue to have an energizing environment for our people, we’re not going to win. Our business priorities require us to have a culture that people want to be part of. It’s every bit as important to business as innovation. In fact, you won’t innovate if you don’t have the right culture and talent.”

At the i4cp 2020 Next Practices Now Conference, to be held March 23 – 26 in Scottsdale, Ariz., Ludgate plans to discuss 3M’s commitment to advancing its culture—and the lessons to be learned from their ongoing culture evolution—in her presentation, “People and Culture: Bringing 3M’s Strategic Priorities to Life.”

Ludgate has held the top HR post at 3M since July 1, 2018—starting on the same day that Mike Roman became 3M’s CEO. With both a new CEO and head of HR on the leadership team, the time seemed ideal to reevaluate the company’s culture and reaffirm its status as a top priority going forward.

“With a new CEO coming in, with a smooth transition behind a highly successful predecessor CEO [Inge Thulin],” she continues, “we were in a position of strength. But we also knew we could not sit still. You don’t want to wait until you see signs of weakness in your culture to try and change or improve it, especially given the speed of business and how central culture has always been to 3M’s success.”

Indeed, 3M has experienced sustained success for well over a century, and has acquired a well-earned reputation for its collaborative, forward-thinking work environment. But, Ludgate, Roman and the rest of the leadership team wanted to specifically identify the components of 3M’s culture that are differentiators, and ensure they remain, while also pinpointing areas where they could make changes or improvements.

“We realized we didn’t have to start with a blank sheet of paper. 3M is a fantastic company that’s been around and has achieved great things,” says Ludgate. “So, we started by identifying our culture’s strengths and opportunities to leverage them. Then, we thought about where we need to stretch and what would make 3M even better. That’s how we’ve thought about it—our strengths and stretches.

“We also knew we wanted to co-create our culture alongside our employees,” she adds. “We intentionally didn’t approach the culture work as something a small group at the top of the company would research and perfect. We wanted our employees to be engaged in the process.”

The experimental nature of the 3M culture is something the leadership team decided must remain at the forefront as a strength, says Ludgate.

“It’s the idea that we can try something and, if it’s not perfect, we’ll make it a little better tomorrow. We need to work on our culture that way,” she says. “We’re a science company. The experience of hypothesizing, iterating, learning, and improving—we need to be willing to do that with the processes, policies, and practices that support our culture. We think of this as wiring our culture into our organization, and it’s an ongoing evolution.”

As seen in i4cp’s Culture Renovation: A Blueprint for Action report, the first step toward renewing your culture is understanding what your current culture actually is, and knowing how it is perceived by key stakeholders and influencers.

In fact, two-thirds of organizations reporting to i4cp that they’ve successfully transformed their cultures say they started by gathering sentiment and related data from key stakeholders to understand how they viewed the existing culture, and what they’d like the new culture to be.

Naturally, Ludgate and the HR team have been instrumental in identifying the elements of 3M’s culture that set the company apart. How? By establishing what Ludgate calls a “listening strategy,” seeking out input from everyone throughout the organization, from the leadership team right on down.

“Early on, when we were articulating our aspirational culture, we iterated several times. We conducted workshops with both the C-suite and employees to test concepts and refine our thinking,” she says. "We’ve also been using companywide crowdsourcing as a big part of this project. We’ve been amazed at the level of response.”

“These steering committees were our first line of input to see what was bubbling up in certain places—geographical, by function, etc.—to make sure we were creating a culture that was truly global and representative, and not just the ‘St. Paul version’ of our culture. (St. Paul is 3M’s global headquarters, with locations in more than 70 countries around the world.)

“We still seek input from the culture leaders as needs arise,” she continues. “We go back to those steering teams to get perspective on how we should think about our crowdsourcing input, and how to use that input to continue to improve our culture.”